The Saucers That Time Forgot: Project Saucer: The Movie

There was a great UFO movie
from the early 1950s that was never made – until the 1960s. The story centered
on the capture of a flying saucer and the exploitation of its technology – the
intriguing concept behind the Roswell crash story and many other UFO legends.

The investigation of
unidentified flying objects by the United States Air Force was officially known
a Project: Sign, then Grudge, then Blue Book, but originally more famous under
the nickname of Project Saucer. One Hollywood producer thought that’d make
a catchy name for a motion picture. Box Office magazine, September 16, 1950, carried an announcement
for a new movie on page 28:

“Better move over, Buck Rogers… Hollywood’s filmmakers are adding space sagas to their dockets. Latest of the movie moguls to probe an explanatory finger into the subject is Jerry Fairbanks, producer of commercial and industrial subjects and video films, who is planning Project Saucer as a feature length entry for theatrical release. He has booked Rip Van Ronkel (who scripted Destination Moon to prepare the storyline and will shoot the opus in color starting this winter, with distribution arrangements yet to be set. Data to be incorporated in the film, Fairbanks said, has been compiled by his research department for the past three years.” 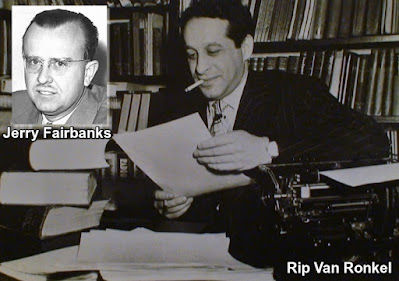 Another mention came in
the Oct. 13 column by Dick Williams in the Los Angeles Mirror:

“Jerry Fairbanks is planning ‘Project Saucer’ based on the official Air Force investigation group (which persistent reports indicate is still busy at work at Wright Field, Dayton, O., under Central Intelligence). Variety says Warner Bros. is interested in ‘Behind the Flying Saucers.’ Republic will start work on ‘Flying [Disc] Men from Mars’ next month.”

The project stalled, but
another attempt at making the film was announced in Broadcasting Telecasting, April 5, 1954:

The timing or the money wasn’t right, and it stalled again. In 1964 Jerry Fairbanks revived Project Saucer, but it took two years to get the cameras rolling. Fairbanks was quoted promoting it in an April 11, 1966, Daily Variety, stating that the script for Project Saucer was written by Rip Van Ronkel “over a decade ago when flying saucers first became the rage in the U.S.” (Sadly, Van Ronkel had died the year before at the age of 56.)

As a result of the negative reaction from the DOD, Fairbanks, director Frank Telford and “a new team of writers” updated the screenplay, changing the story away from being a Project Blue Book investigation. As it was retooled, the Vietnam-era anti-war sentiment influenced the script and probably the location of the action. The organization sponsoring the UFO retrieval was not named as the CIA. Also, the role of the Air Force was virtually eliminated from the story and more of the characters were changed to civilian specialists.

To save on the budget,
the movie was set to be filmed in Spain, but Fairbanks was able to strike deals
to make it for the same cost and began production in Hollywood in the fall of
1966 with National Telefilm
Associates (NTA). When completed, Project Saucer sat on the shelf for
over a year until a distributor could be found, finally released in early 1968
as The Bamboo Saucer. The title was a play on the Cold War phrase, “Bamboo
Curtain,” itself a variant of “Iron Curtain” for the demarcation between the
Communist and capitalist states of East Asia, particularly the People’s
Republic of China.

The plot of the movie was slightly similar to Mikel
Conrad’s 1950 film, The Flying Saucer, with rival teams from the US and
Soviets out to capture a flying saucer for their nation. The 1950 film was about
a secret terrestrial weapon but this time, the saucer was of extraterrestrial
origin. Otherwise, there were no
science fiction elements, the story was based on UFO lore from the genuine – the
saucer-related death of Captain Thomas F. Mantell on January 7, 1948, to
the fantastic – Frank Scully’s magnetic
spaceships from Behind the Flying Saucers. 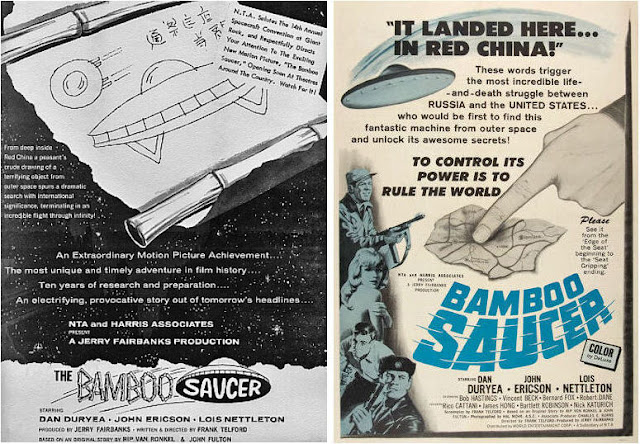 In advance of its release, The Bamboo Saucer was promoted via the flyer pictured above at George van Tassel’s famous flying saucer Contactee convention in October
1967:

The copy teased the story:

“From deep inside Red China a peasant’s drawing of a terrifying object from outer space spurs a dramatic search with international significance, terminating in an incredible flight through infinity!”

The actual theatrical movie poster for The Bamboo Saucer said:

“’IT LANDED HERE…IN RED CHINA!’ These words trigger the most incredible life-and-death struggle between RUSSIA and the UNITED STATES…who would be first to find this fantastic machine from outer space and unlock its awesome secrets!”

The Depiction of UFO Concepts in the Movie

Our summary of the film skips many of the plot elements
and drama to focus on the UFO aspects of the story. If you wish to watch the movie
before reading, I can be viewed on YouTube.

While flying the experimental X-109, test pilot Fred Norwood encounters a UFO, a large blue disc with a domed top, no ports or windows. The saucer does not rotate, but pulsing lights around seem to spin around its rim. It flies with great speed and makes erratic turns and maneuvers. The title and the opening credits roll, then this text introduction appears on the screen:

“Grateful acknowledgement is made to all the nationally recognized organizations and publications whose research and records have formed the basis for this story. To the more than 5,000,000 persons who claim to have actually seen Unidentified Flying Objects, no explanation is necessary. To all others no explanation is possible.” 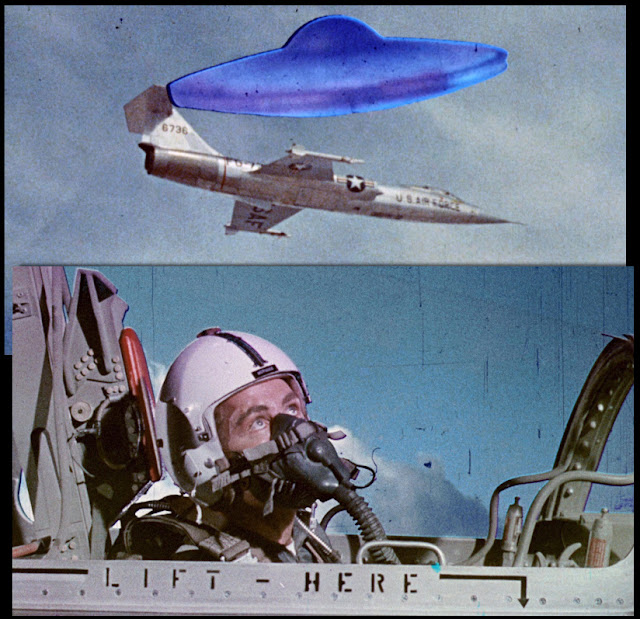 When Norwood lands, he describes the saucer to the flight control as, “Disk-like maybe 40 feet in diameter. Shiny, metallic.” However, there’s no proof; the UFO disabled ground radar, and they tell him all he saw was an illusion caused by a temperature inversion. Norwood is fired from the project, but tries to pursue the UFO independently, and it results in his friend being killed in a crash reminiscent of the tragic incident with Captain Mantell. We aren’t told that the UFO is hostile, but both incidents depicted show the saucer interfere with the flight of our aircraft, the second time with deadly results. 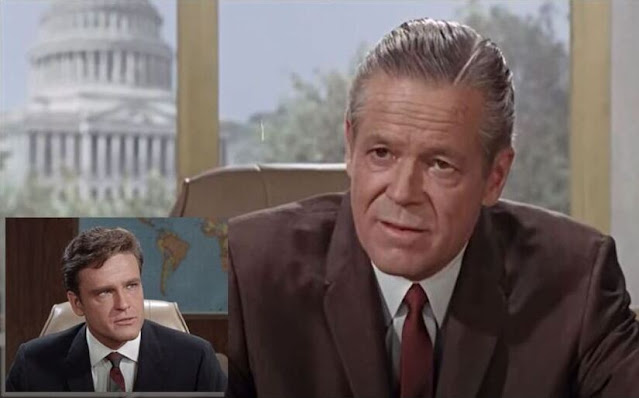 Sometime later, Norwood is summoned to the Washington, D.C. to meet Mr. Hank Peters of an unnamed US government agency with an office door marked, “Security Personnel Only.” Peters shows him a sketch that matches Norwood’s saucer and tells him it’s of a UFO was that was recovered in Red China and hidden in an abandoned church:

“It landed there… the bodies of two – uh – creatures were found nearby, human-like and yet different… The remains decayed very rapidly, and the peasants cremated what was left. …that thing could be so scientifically advanced as to make our technology obsolete and if the Red Chinese get their hands on it, the free world is obsolete.”

Peters recruits Norwood
and two other civilians for the US team, and they parachute into China with the
mission to clandestinely evade the Chinese Army to capture – or destroy the saucer. On the way to
the UFO’s location, they encounter their counterparts, a team from the Soviet
Union and they face each other with guns drawn. 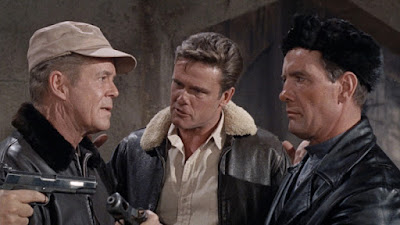 Both teams are composed
of scientists and technical experts but led by government men with a military agenda.
It turns out the Soviets are also operating in secret, and the two teams reluctantly
agree to work together for mutual survival, and to prevent the Chinese government
from getting the saucer. 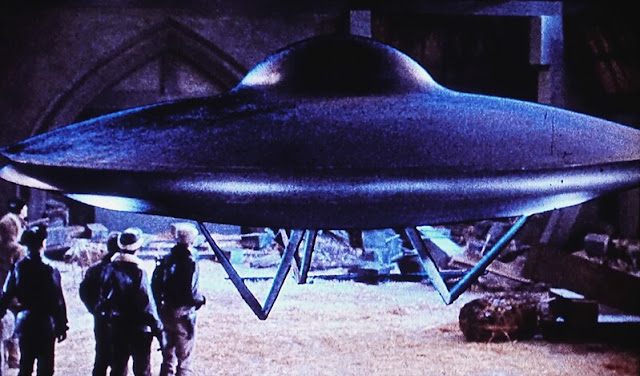 When they finally find the saucer, the scientists determine it is made from an unknown metal stronger than anything known. Entering the cabin, they find it full of consoles, screens, and instruments designed to be operated by human-like beings. 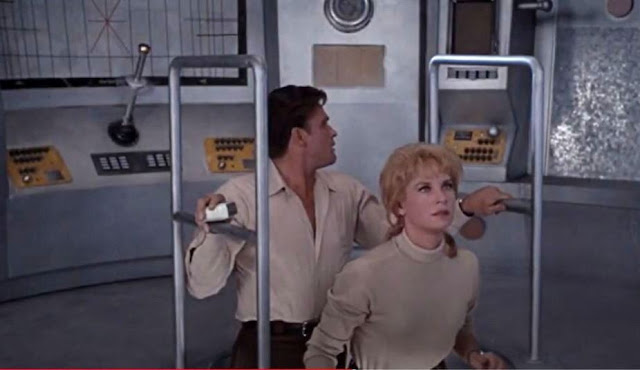 Portions of the dome are transparent, like four one-way windows, undetectable from the outside. There are no seats or restraints, and they decide the ship produces its own gravity field which allows the occupants to withstand the extreme maneuvers the craft performs. They briefly activate the propulsion and determine its technology operates by “universal lines of magnetic force.” The Russian metallurgist Zagorsky says:

“If we could utilize this principle, we could exploit literally limitless fields of energy. We could irrigate deserts, desalt oceans, increase production of food, of everything, one-hundred-fold.”

Norwood, replies, “We could also manufacture one hell of a super-weapon.” 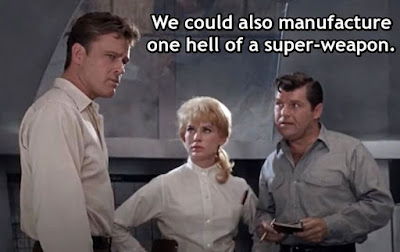 The Chinese army discovers their location and each team’s hawkish leader takes their men to (G-rated) war. Three of the teams’ members narrowly manage to escape with the saucer, but they lose control, and it flies into space. 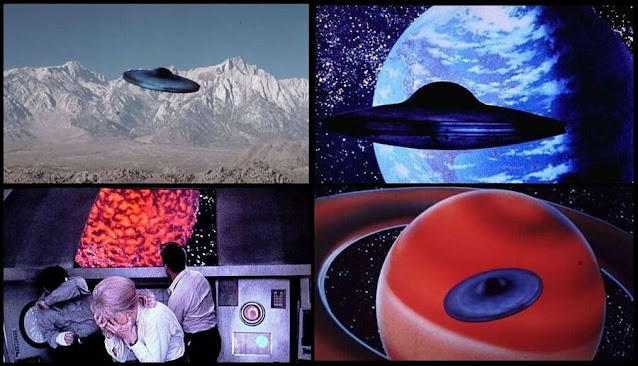 As it approaches light speed and heads for a crash into Saturn, working together they literally turn things around and return to earth, deciding no one nation should be given such power.

They head for neutral territory, and on the way, Fred Norton delivers the moral of the story:


“You know, when the world sees this ship, everybody’s gonna have to realize there are other intelligent beings in the universe. They will have to meet them face to face one day. All the nations of this earth better be ready to stand together.” 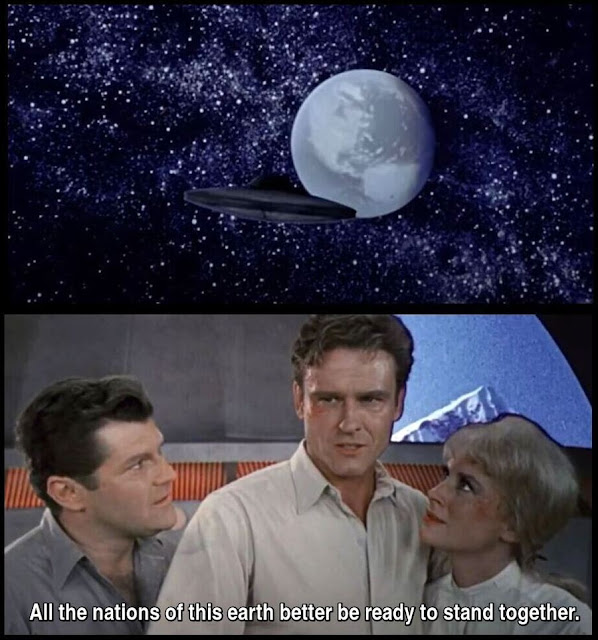 The story was influenced by Silas Newton’s Aztec yarn depicted in Behind the Flying Saucers by Frank Scully, where landed saucers and dead crewmen were captured by the US military.

Another element from Scully’s book is the magnetic powers source which can be used to provided free energy or used as a lethal weapon. The screenplay eliminates the aliens from the story and only the saucer itself is left as a technological mystery and prize for the nation who captures it. The final message is similar to that of the Contactees like George Adamski, that Earth’s nations should unite in brotherhood.

The Crash of a Flying Saucer Film

The Bamboo
Saucer is a little-known film that
it was overshadowed by the release of two science fiction classics the same year,
Planet of the Apes and 2001: A Space Odyssey. The film was produced
by a minor studio, a low-budget B-feature exhibited mostly at drive-in theaters.
While

The Bamboo
Saucer has its flaws, it is
worthwhile for how it examines some UFO concepts. It might be regarded as a
classic if it had been completed in the 1950s alongside The Thing from Another
World and The Day the Earth Stood Still. The screenplay was ahead of
its time, but by the time it was filmed a decade and a half later, even
television had been churning out saucer and alien stories for years.

The Bamboo Saucer was
translated and issued abroad. In 1969 it was re-released, cut from 103 to 90
minutes under title Collision Course and later televised under that name. 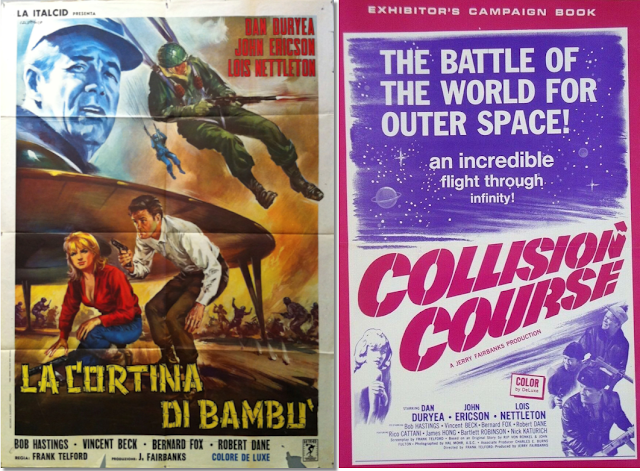 The end of the 60s were bad for the UFO business in fact and fiction. On television, Star Trek was cancelled on Feb. 18, 1969, and months later Project Blue Book closed shop on investigating UFOs. Except for the Planet of the Apes franchise, not much was happening for science fiction and space films in the cinemas. It wasn’t until the mid-1970s, when a sf resurgence led to mainstream blockbusters like Star Wars and Close Encounters of the Third Kind.

The Bamboo
Saucer was either behind or
ahead of the times. It’s worth picturing it as an anachronism, and with a
healthy sense of wonder and imagination – for what might have been. 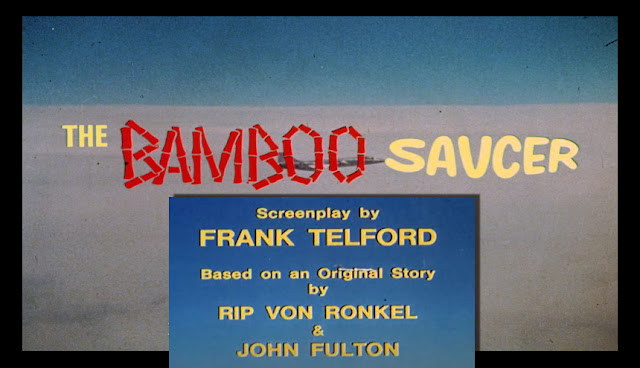 The original theatrical version can be seen at the Internet Archive or watched on YouTube.

The American Film Institute site reports that one contributor died shortly before movie and another shortly after its release. “On 1 Jul 1966, in the midst of pre-production, writer and special effects man John Fulton died of a blood condition… The Bamboo Saucer also marked the final feature film role for Dan Duryea, who died of cancer on 7 Jun 1968.”

Special thanks to Ricky Poole for introducing me to this The Bamboo Saucer and the story behind it.

US ‘not politically ready’ for UFO, extraterrestrial contact: Top physicist

A Russian mathematician rewrote history — and it is bonkers