Thanks to STTF reader Richard Garrard for the tip on this story.

When flying saucers fever hit in the summer of 1947, one of the early notions was that the UFOs were signs of the end times as prophesied in the New Testament of the Bible. Our earlier article Signs: Ezekiel, the Bible and UFOs examined some of the first discussions of the religious connection, and how some people thought the saucers were a warning from the Lord.

During the 1952 flap the Air Force told us not to worry. According to General John Samford, saucers were not a threat to national security and, “reports of this kind go back to Biblical times.” As time went on without a solid answer, some people thought UFOs might indeed be a sign, but instead have an ungodly origin.

The Laymen’s Home Missionary Movement was formed in the early 1900s, an offshoot of the Jehovah’s Witnesses. In 1954 they issued a four-page tract, “Flying Saucers,” that suggested UFOs were not secret weapons or extraterrestrial spaceships, but part of the demonic manifestations of the “great signs and wonders” proceeding The Second Coming.

The first page of it is reproduced below from the Museum of Weird and Demented Religious Tracts. 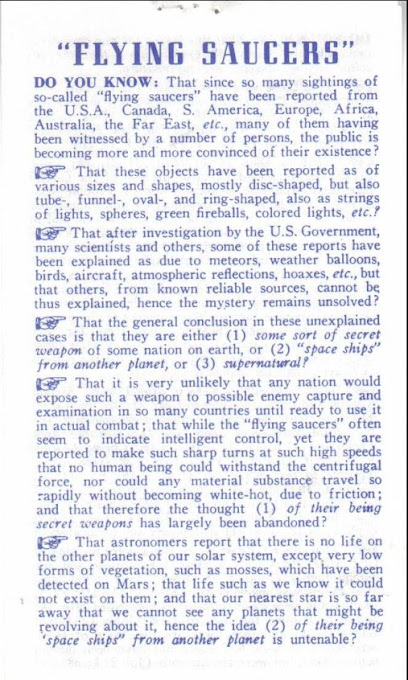 The edited text of the tract (along with another) ran in The Oregon Statesman, April 22, 1954, on page 5, an advertisement by Gerhard Smith.

An excerpt follows, then a reproduction of the complete article.

That the general conclusion in these unexplained cases is that they are either (1) some sort of secret weapon of some nation on earth, or (2) ‘space ships’ from another planet, or (3) supernatural?  …the thought (1) of their being secret weapons has largely been abandoned? …the idea (2) of their being ‘space ships’ from another planet is untenable?

DO YOU KNOW: That this leaves for our consideration only the third (3) explanation that the so-called ‘flying saucers’ are supernatural?

…[Satan’s league of fallen angels] … these lying, seducing spirits… under ‘the prince of the power of the air’ have played many tricks on mankind, such as palming themselves off as a dead human still alive… appear in seances… obsess and possess humans, driving many insane… they operate through spirit mediums… give visions, work miracles, haunt houses, slam doors etc.?

…evil spirit beings are given greater liberty… here in the end of the Gospel Age… this greater liberty now granted to the fallen angels could easily account for their greater boldness and startling manifestations on a larger scale, such as the reported balls of fire, green monsters, ‘flying saucers,’ etc., recently seen world-wide in the heavens and on earth?”

In the absence of conclusive evidence, Robert Bigelow and company have expanded the search for UFO answers to other mysterious things including the psychic realm, the paranormal, and life after death. The Laymen’s Home Missionary Movement beat them to it way back in 1954. Ufology has a rich past. It’s history should be studied, not recycled.

For more on the intersection of UFOs and religion see:

Getting to know Göbekli Tepe