The Saucers That Time Forgot: UFO Patterns: Signals in the Noise


Hearing an unbelievable or absurd flying saucer yarn, Gray Barker would often respond with an enigmatic smile and say, “It all fits the pattern.” It was a private joke, since much of popular UFO lore was invented or circulated by Barker himself.

The human mind is always trying to find patterns. Most people are familiar with pareidolia, which Merriam-Webster defines as “the tendency to perceive a specific, often meaningful image in a random or ambiguous visual pattern.” Pareidolia applies to visual stimulus, but it’s a type of apophenia, “the tendency to perceive a connection or meaningful pattern between unrelated or random things (such as objects or ideas).”

Apophenia is finding false signals in the noise. Confirmation bias can play a role as well, and once we’ve adopted a hypothesis, we favor that which seems to fit with, or support our view. An example of that is when Italian astronomer Giovani Schiaparelli detected lines on the surface of Mars, he interpreted them as canals, proof of construction by intelligent inhabitants. When flying saucers came along, it had people making all kinds of mental connections in trying to solve the mystery.

As early as 1947 the Air Force was looking at UFO sightings to determine some actionable data. The idea was that if UFOs were under intelligent control, some evidence of that should be found by identifying repetitions of some characteristics, such as shape, performance, behavior, and locations observed. In March 1953, Project Blue Book head Edward J. Ruppelt gave a “Briefing for Air Defense Command,” where he stated:

“We have made a statistical study of the data that we have collected in order to attempt to determine whether or not there is any common pattern in the sightings but we have had no success in finding any such pattern.”

Dr. J. Allen Hynek was an astronomer who worked a side gig as a consultant to the Air Force. In the mid-1960s Project Blue Book had authorized Hynek to recruit assistance from colleagues in analyzing and processing UFO reports. Jacques Vallee, a young French ufologist who was pursuing his Ph.D. and working as a computer programmer, was brought in chiefly to assist in data management. Vallee was always looking for messages in the data, and in his 1965 book, Anatomy of a Phenomenon, frequently mentioned patterns and pattern-analysis:

“If new phenomena are present in the set of patterns that constitutes the UFO problem, there is a possibility that these phenomena may lie outside the scope of any one of the specialties recognized today by science, and still be discernible to the mathematical mind.”

Hynek was influenced by Vallee and searched for common features or patterns in UFO reports.

The San Bernardino Sun, May 1, 1967, ran an article, “It’s Easy to Be Ufologist — Just Read Below” by Karl R. Edgerton. Dr. Hynek was quoted, saying the “more impressive cases” among the unexplained sightings “fit into a pattern.” He listed five common characteristics. 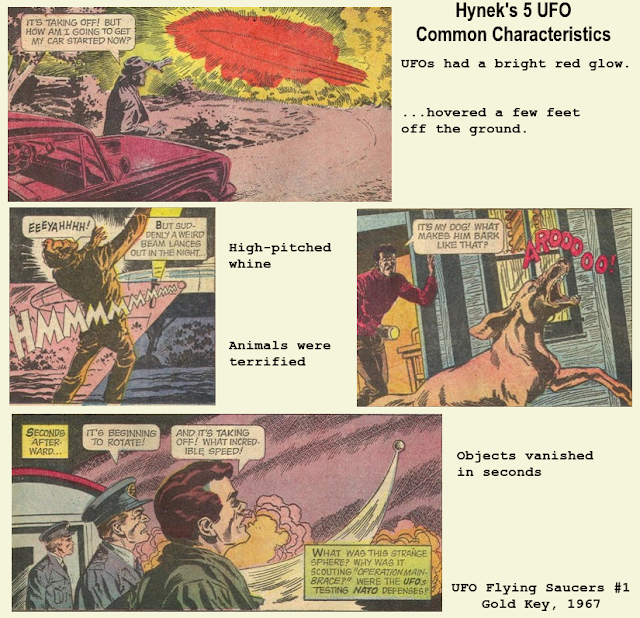 The next year (Amarillo Daily News, Feb. 15, 1968,) Hynek was asked about the Carroll Wayne Watts case and Texas UFO flap, and he was supportive. “He said many facets of the sightings at Wellington ‘fit the pattern’.” Unfortunately, the Watts case turned out to be hoax, a pastiche based on the alien encounter stories from Dan Fry and Barney and Betty Hill. Watts’ yarn fit the pattern through counterfeiting and mimicry.

After the closure of Project Blue Book, Hynek wrote a book in 1972, The UFO Experience: A Scientific Inquiry. In it he used the word “pattern” 343 times, most often in this context, “UFOs in general, have been reported from many parts of the world, and a definite pattern is evident.” Discussing the 1961 Hill abduction story, Hynek said, “If we discount entirely the account revealed only under hypnosis, the first portion fits the pattern.” Hynek talked about how conventional items mistaken for phenomena did not typically generate reports of high strangeness.

“An aircraft fuselage glistening in the sun, reported by some untutored person as a UFO, is not reported to rush away at incredible speeds. Flares dropped from airplanes (which have often given rise to UFO reports) are not reported as having stopped cars, frightened animals, or cavorted about the sky; nor do the reports contain reference to ‘occupants’ or to oval-shaped craft hovering six feet oﬀ the ground.” 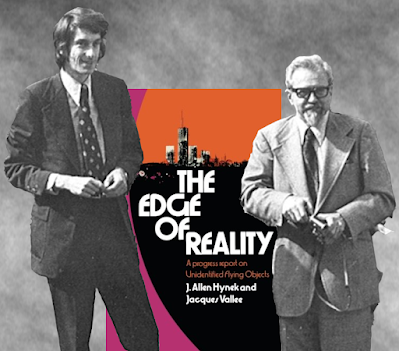 Jacques Vallee, and J. Allen Hynek wrote in their 1975 book, The Edge of Reality: A Progress Report on Unidentified Flying Objects, “definite patterns of appearance and behavior” repeat in cases throughout the decades:

“One would expect that if UFOs had no substance in fact but were entirely the products of human imagination, there would be considerably greater variety in UFO reports. It does not say much for human imagination to report the same old (but incredible) stories; over some three decades one would imagine that story tellers as well as out and out hoaxsters would bring some variety into their productions!”

On Geraldo Rivera’s ABC talk show Good Night America on June 9th, 1977, Dr. Hynek was asked about the Travis Walton story, and he was supportive of it.

“It fits a pattern… we have some two dozen similar abduction cases currently being studied. Something is going on!”

One of Hynek’s last interviews was in Omni magazine Feb. 1985, and he was asked about his Center for UFO Studies. “What was the understanding that began to emerge from your work?” Dr. Hynek replied:

“I realized that we don’t have UFOs, only UFO reports. I defined the UFO phenomenon, then, as the continual flow of strange sightings and reports from all over the world. The patterns and contents of these reports constitute the UFO phenomenon. The phenomenon says nothing whatsoever about origin, nothing about little green men. The question about whether you do or don’t believe in UFOs is irrelevant. If you define the UFO as the UFO report and its consistent contents, then the phenomenon is there.” 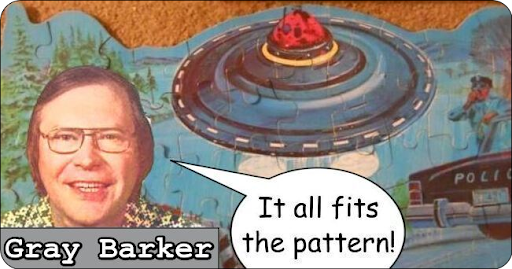 The Enigma of the Calvine-Like UFO Photos